At Transform Consulting Group, we make it a priority to stay current with the latest research and trends across our clients’ sectors. For example, we wrote in a previous blog about a new practice where programs are using a two-generational approach, which looks to achieve greater impact through services that support both children and adults. Many times, those program models are based on research that support their success. In this blog, we spotlight an innovative study that is being used in many sectors: the Adverse Childhood Experiences (ACEs) Study.

What is the ACEs Study?

Between 1995 and 1997, Dr. Vince Felitti from Kaiser-Permanente and Dr. Bob Anda with the Center for Disease Control (CDC) conducted surveys of more than 17,000 adults in Southern California about trauma experienced in their childhood. The trauma included abuse, neglect, parental mental illness, incarceration, poverty, substance abuse, divorce or separation, and domestic violence. The researchers found that one in eight respondents had four or more ACEs (1 point for every “yes”), and two-thirds (67%) of respondents had at least one ACE. 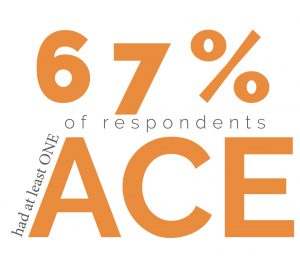 What are the implications of an ACE score?

Some reacted to these results without shock, already linking childhood trauma with higher rates of at-risk behaviors, such as smoking and drinking. However, research now shows the effect childhood trauma has on the developing brain, including inhibiting the prefrontal cortex, which is responsible for reasoning and impulse-control, as well as the amygdala, which is the brain’s fear-response center. This research is important to know; however, the ACEs Study also shows that those who do not partake in high-risk behaviors are still more likely to develop heart disease or cancer. As Nadine Burke Harris explains in her TED Talk on this subject, this is due to the hypothalamic-pituitary-adrenal axis, the brain and body’s fight-or-flight response system. She equates this to seeing a bear in the forest and how your body recognizes the threat, activates the axis, and increases the body’s stress response (higher heart rate, opened airway, eyes dilate, etc.), so you are ready to either fight or run from the bear. This is a life-saving stress response when you are in a forest with a bear, but what happens when this stress response is triggered repeatedly due to threats in the home, or at school, or anywhere else in life?

Having this stress response triggered in a child repeatedly has been shown to negatively impact their developing brain, immune system, hormonal systems, and how their DNA is read, to the point of higher rates of illness and disease in later life, as the ACEs Study confirms.

How to Determine an ACE Score

By popular demand, Dr. Anda released to the public a PDF of the questionnaire used to identify one’s ACE score. It is a simple 10-question survey that anyone can administer in which a “yes” equates to one point. The sum of all “yes” responses is an individual’s ACE score. 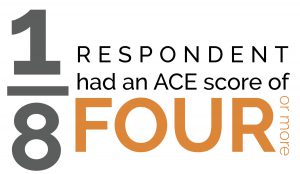 Some government agencies, such as health departments are adding the ACEs questionnaire to other survey instruments administered to the public to gather information about their local population’s trauma experiences.

Using ACEs to Inform Your Work

No matter your sector or nature of work, there are a few relevant takeaways from this study.

At Transform Consulting Group, we provide project management for the Early Learning Advisory Committee (ELAC), which consists of seven volunteer workgroups that focus on different aspects of early learning. Multiple ELAC workgroups have used the findings from this ACEs Study to inform their work, including the Child Development and Well-Being workgroup. In 2017, this workgroup helped draft a policy on suspension and expulsion using brain development research that relates to one finding from the ACEs Study which shows how higher ACE scores negatively impact a child’s brain and social-emotional development. In addition to careful wording in the policy, the workgroup is also developing resources to support the implementation of this policy, as well as information on brain development and trauma’s impact.

Another ELAC workgroup, Evaluation of Child and Family Outcomes, is looking to use data from the ACEs Study as family outcome measures, including reporting the barriers created by childhood trauma and how families are doing. The Indiana State Department of Health is planning to add the ACEs questionnaire to an upcoming survey, so there will be information on ACEs scores for some Hoosiers.

We at Transform Consulting Group know the importance of understanding the latest research to help our clients align with best practices and accelerate their impact. Want to learn more about how we can support your work and integrate the latest research? Contact us today!