The idea of forming a coalition to address an issue is not new or specific to the early childhood field.  Coalitions are well used in other sectors, such as economic development, workforce development, and education.  What is somewhat new is the idea that organizations need to work with otherorganizations and stakeholders, often some unusual partners, to make 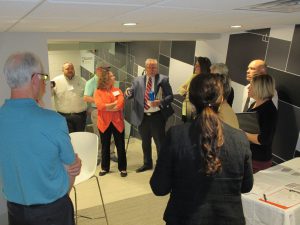 progress and realize their outcomes.  We talked about this in a past blog article here.

Early childhood education is complex and multifaceted.  It affects so many other sector’s goals: health, education, workforce, economics, and criminal justice.  As communities have started to organize around one of these other issues, such as a desire to increase their talent pipeline they realize that early childhood education can be a solution to address their goal.

Indiana has a strong value of local decision-making, and most of the state’s work is implemented regionally or locally.  There are also some natural partners and resources available in most communities – Community Foundation, United Way agency, and/or Economic Development group) – who are already aligned to supporting this work.  These organizations can make great conveners in communities to get a coalition started.

As Indiana has worked to expand state funded pre-k through On My Way Pre-K, it has done so through county-wide expansion efforts and not just grants to individual early childhood education programs.  In 2015, five counties (Allen, Jackson, Lake, Marion and Vanderburgh) were designated On My Way Pre-K counties to receive state dollars to enroll low-income children in high quality pre-k.  In the most recent legislative session, an additional 15 counties (Bartholomew, DeKalb, Delaware, Elkhart, Floyd, Grant, Harrison, Howard, Kosciusko, Madison, Marshall, Monroe, St. Joseph, Tippecanoe and Vigo) were selected to be a part of the On My Way pre-k expansion effort.

A common thread in all of these selected On My Way Pre-K counties is that they have a coalition in place that is focused on early childhood education.  If your county has not been selected yet to participate in On My Way Pre-K, it might be time for your community to get ready for the next expansion opportunity.

While we are working with state partners to build local capacity through the ELAC County Profiles, the Indiana Summit (discussed in this blog post) and a new ELAC Coalition Building Toolkit that will be released later this year, we also work locally with communities.  We recommend these steps for any community looking at forming a coalition, regardless of if the topic is early childhood education, workforce development or another issue area!

The second task is to make sure everyone is on the same page with their understanding of the community and issue area.  During this phase, your coalition should gather relevant key indicators from current community needs 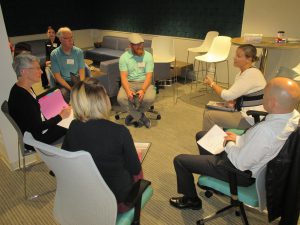 assessments and public data.  In addition, this is also the opportunity to gather feedback from a variety of key stakeholders relevant to the topic at hand through interviews, surveys, and focus groups.  During this step you will not only gather invaluable feedback but also start to build community will and buy in.  For the Wabash Early Childhood Coalition, we used the ELAC County Profiles and IYI Kids Count County Profile.  We also held focus groups with all types of parents, surveyed businesses and parents, and met individually with key stakeholders to collect their input on the current needs and strengths in the community.

Too often community coalitions jump right into planning a project or initiative without thoughtfully completing the first steps above and having an intentional plan in place.  This step is critical to bring the coalition together in agreement about the focus of the coalition and its goals to accomplish. We suggest keeping the goals between 3-5, and they should be a combination of short-term “easy wins” that can be accomplished within the first year with minimal costs as well as some long-term goals that are broken out into specific action steps over time.  It is critical to have the short-term easy wins, so that the coalition builds credibility in the community that it is results focused and creates momentum.  It is also important to break down the steps needed to accomplish those big goals that will take more time and effort, so that they don’t get lost in being “too hard” or “not having enough money”.

Once your coalition has consensus on what it wants to do and an intentional plan in place, now it is time to put it in action.  Your coalition will need to determine who and how this plan will be implemented, which will include identifying a “backbone support” organization.  This might be one of the coalition members taking on the work and/or applying for funding to hire a staff person to implement.  During this phase, your coalition will want to build in some key outcomes that it is focused on tracking to be accountable for making progress on the issue on the identified.

When diverse stakeholders come together in agreement to address a common issue, transformational change can occur.  This is what gets us excited at Transform Consulting Group.  If your community would like assistance with a coalition, give us a call or send us a note.  We would love to learn more about what you are wanting to accomplish and how we might help!